Share
In Tiny Houses, characters Cath and Bohdi abandon their jobs in the big city to build a tiny house in the calm atmosphere of northern Oregon with the hopes of leading a simpler life. Downsizing to a tiny house, they believe, will help them achieve a new level of happiness. 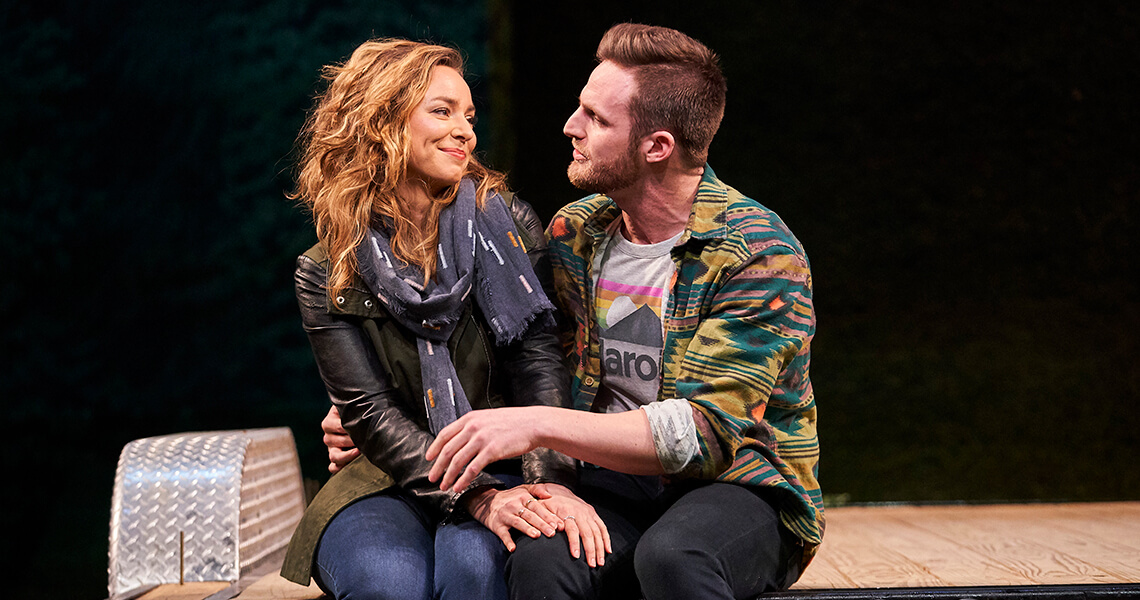 
To some, it might be difficult to understand the tiny house movement. We like our space, and we like our stuff! To tiny house owners, however, their lifestyle is about much more than a modest living space; it is a physical manifestation of their values. The Playhouse’s new, world premiere comedy Tiny Houses examines the idea of a minimalist lifestyle.

While most minimalists only own what they truly need, this is merely one aspect of their lifestyle. Minimalism is an external and internal philosophy that encourages the search for fulfillment through life itself, rather than consumerist culture. It promotes a way to disengage from the hustle and stress of everyday life through an intentional mindset of what brings your life meaning. By unsubscribing from the modern illusion that owning things makes us happy, minimalists find freedom and time to prioritize their relationships and personal growth. Furthermore, there are no rules or guidelines to becoming a minimalist. Trying to achieve a more meaningful life requires an examination of your own values to discover an approach that works best for you.

Joshua Fields Millburn and Ryan Nicodemus, most often referred to as “The Minimalists,” explain and advocate for a minimalist lifestyle through their website, books, podcast and Netflix documentary, Minimalism: A Documentary About the Important Things. Their film features several, completely different but successful minimalists. Joshua Becker has a career, family, house and car in the suburbs; Colin Wright owns 51 things and travels all over the world; Tammy Strobel and her husband live in a tiny house.

Although everyone practices minimalism differently, the goal is the same: to live a life driven by purpose.

“We’re not going to fill our tiny house with a bunch of crap we don’t need. We’re going to prioritize relationships.” — Bohdi

The most common approach to minimalism is the removal of clutter. By owning less, minimalists make room for their minds to breathe and address their deeper concerns. They focus their energy on what brings their life meaning, rather than letting material possessions overwhelm it. While consumer culture suggests that “the more you have the happier you’ll be,” minimalism finds truth in the opposite. By only owning the essentials, minimalists experience freedom and happiness because they can focus on what is truly important in their lives.

Through the process of decluttering, minimalists strive to get every item they own to serve a purpose or bring joy. In her New York Times best-seller, The Life-Changing Magic of Tidying Up, Marie Kondo articulates this philosophy by encouraging readers to organize their homes through a determination of which items “spark joy.” Kondo, a world-renowned tidying expert, can also be seen in the Netflix series Tidying up with Marie Kondo, in which she demonstrates her KonMari method through inspiring home makeovers. Ultimately, Kondo brings a mindfulness to cleaning that is tightly embedded in minimalist ideology.

Minimalist experts have also given guidance on how to declutter our closets. Beyond the obvious solution of getting rid of unworn pieces, some minimalists choose to build a capsule wardrobe that uses a limited number of timeless clothing pieces to create outfits that make them feel their best. With the goal of having less clothing to choose from, capsule wardrobe owners only keep mostly basic or versatile pieces.

Inspired by the concept of capsule wardrobes, minimalism author and blogger Courtney Carver developed Project 333 — a three-month minimalist fashion challenge that invites you to dress with only 33 items or less. The challenge quickly gained a following and was featured in the March 2014 issue of O, The Oprah Magazine.

“When I wrote about dressing with less and Project 333 for the first time,” says Carver, “I had no idea that people from around the world would write about their experience and thousands would accept the challenge.”

“The point is to own a modest home and live a simple life.” — Cath

Depending on the amount of leftover space, decluttering may elicit a decision to downsize. The process of downsizing not only prevents owners from reacquiring possessions, but it also promotes a simpler and more modest lifestyle desired by minimalists and ones aspiring to be so.

The tiny house movement is an extreme expression of this philosophy. The real estate trend has taken the housing market by storm where people are choosing to live in homes between 100 and 400 square feet (compared to a typical American home around 2,600 square feet). While some tiny homes are purchased or adapted from trailers, people are also drawn to the “do-it-yourself” project of building a tiny house themselves. This is the case in Tiny Houses, where a tiny house is physically built onstage by a group of millennials over the course of the play.

While saving both time and money, tiny houses can bring about a more meaningful and conscious lifestyle. More than just an architectural movement, tiny houses have inspired a social movement that promotes peace of mind that comes with the decision to live small.

“The world gets bigger when you’re living small.” — Bohdi

In Tiny Houses, Cath and Bohdi make an earnest attempt to convert to a minimalist lifestyle, and they do so alongside characters Ollie, Jevne and Jeremiah, who assist in the construction of their tiny house. But will all of these relationships survive the project? Will living small be a huge mistake? Tiny Houses explores what happens when our world begins to shrink.