Share
Actor Maury Ginsberg makes his Playhouse debut this season as Isaac in Disgraced. Learn about his favorite roles, how he started acting and what he loves most about being on stage. 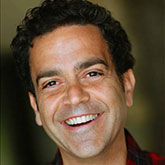 Maury’s off-Broadway credits include Laugh It Up, Stare It Down at Cherry Lane Theatre. Regional theatre credits include productions at The Old Globe in San Diego, Great Lakes Theater, South Coast Repertory, Geffen Playhouse, Geva Theatre Center, Philadelphia Theatre Company, Arizona Theatre Company and Pasadena Playhouse, as well as three seasons at the Williamstown Theatre Festival, among others. Recent film and television credits include 5 Flights Up, Madam Secretary, The Blacklist and Vinyl. Other film and television credits include Sundance Film Festival winner Rocket Science, According to Greta, Big Miracle, My One and Only, The Girl in the Park, Louie, Blue Bloods, House of Cards, The Good Wife, Damages, Law & Order: Special Victims Unit and Friends, among others.

I've been acting professionally for about 25 years. I majored in drama and dance at Bard College. When I think back, it was an amazing program. I also landed a job at Williamstown Theatre Festival and did three seasons as part of its non-Equity company. The non-Equity company at that time included the likes of Philip Seymour Hoffman and many others. We did Henry IV together and Mother Courage — it was a magical time — and we all became very close. It's also where I met Austin Pendleton and Olympia Dukakis. Olympia continues to be a major force in my life: a mentor, a collaborator and a great friend to this day.

I wanted to get the attention of a girl I had a crush on in ninth grade, so I auditioned for a play called The Drunkard. I got the part of the drunkard. Not the girl. So I stuck with what worked — acting. Before that I wanted to be a professional drummer. Yep. My favorite part of the job is getting on your feet — the movement. I’m a physical guy, and I get a lot of information from my body.

There are a lot of roles I'd love to play, but probably Vanya in Uncle Vanya and Shylock in The Merchant of Venice. I guess being a parent and getting older has a lot to do with it. Makes you feel ready.

The most interesting part of working on Disgraced so far has been the table work. So comprehensive and creative. Director Lisa Portes is fantastic!


Photo of Maury Ginsberg and Bethany Jillard in Disgraced by Mikki Schaffner.