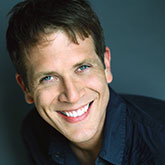 I have been acting for my entire life. My mother used to come pick me up from nursery school, and I'd be directing the other kids in shows. I was born with theatre in my blood. My parents were very supportive, even allowing me to move away from my hometown at 17 years old to attend a performing arts high school four hours away. I trained in the Drama School at The University of North Carolina School of the Arts. It is a conservatory-style school, and it was rigorous and demanding and perfect for my temperament.

There is a lot to love about being an actor ... I think maybe my favorite part of what I do is that for the eight or 10 or 12 weeks that I am working on a project, I become an obsessed expert in the details and circumstances of that particular play. If I am playing a jag in the military, like in A Few Good Men, it is the Marine Corps Code. If it is a commedia piece, like The Glorious Ones, it is the nature of slapstick and lazzi. Then a show closes and your focus must change to the next set of circumstances. It makes you a jack-of-all-trades, yes, but it also keeps life interesting and ever-changing.

Well, Johnny Wheelwright in A Prayer for Owen Meany is on my list of favorites, for sure. I am enjoying this process immensely. Telling this story onstage is a great joy for me, and I usually feel as though my favorite role is the role I am doing right now. That said, my hands-down favorite role of all time was playing The Third Man in the New York revival of Paula Vogel's brilliant masterpiece The Baltimore Waltz. I played 17 roles in 80 minutes with eight or nine different accents, and it was a virtuosic dream come true. I have been blessed to play many deeply satisfying roles in my career, but I was euphoric while playing The Baltimore Waltz.

A lot of Shakespeare has passed me by, which is perplexing because in Drama School that is what we really prepared to play. I have never done a Romeo or a Hamlet or any of the Henrys or Macbeth or Orlando. Now I am too old to play at least half of those roles. It’s just so strange ... That said, I would go anywhere right now to play Astrov in Uncle Vanya. I was working on it in class in New York this spring and I think I am ready for it. So today, it’s Astrov.

Watching the play bloom and grow before my very eyes. I have the good fortune to be onstage for (nearly) the entire show and therefore I get to watch this incredible company of actors work their magic night after night. On the page, this play is an outline, waiting to be filled. This director and these actors have painted and detailed it masterfully. It changes every night. It is a joy.


Photo of Jeremy Webb and Sean Mellott in A Prayer for Owen Meany by Mikki Schaffner.