Share
Max Alexander-Taylor tells us about bringing his performance in The Lion, a one-man show, to Cincinnati at Warsaw Federal Incline Theater.

You performed this show at Southwark Playhouse in London last summer. Tell us about your experience in terms of audience response and performing live in such an intimate setting.
In musical theatre, the final collaborator is the audience, and none more so than in The Lion. The audience is an additional character, and with that comes a freshness every night. The Lion is a conversation piece but whilst the audience have no lines, they provide most of the energy in the room. The intimacy of the Southwark Playhouse amplifies this tenfold. I’ve never been in a show that is so reliant on an audience’s attention. Thankfully, The Lion is written with such clarity and heart that the attention of the audience is never something I’ve had to worry about.

Before you began rehearsals, what was your initial response to the story?
I was blown away. I’m a bit of a writing nerd. I love structure and literary theory. Usually, I have my analysis brain on when first experiencing a piece of theatre. When I watched Benjamin’s recorded version, the show totally bypassed that part of my brain. My response was pure catharsis. There were no emotions or questions left unexplored by the final note of the show. The themes covered are universal: grief, illness, love, family, community, healing, growth, home. Many shows try and fail to deal with these issues; they either feel ham-fisted or incomplete. Upon rewatching numerous times could I really appreciate how the themes working within such a tight and complete structure provoked such a cathartic response.

Folks who have reviewed The Lion have written about the unique space it occupies in the world of musical theatre. How would you describe the genre of the show?
A good friend of mine, Adam Lenson, who is a writer and theatre director in London, talks with great clarity about defining musical theatre. Musical theatre is a medium and not a genre. Just as a play, ballet or painting is a medium, musical theatre is its own thing. The Lion, structurally and in terms of content, is very much a musical. The songs feel like folk songs but function as musical theatre ones: They progress the narrative and take a character from one state to another, all while an audience is hoodwinked into thinking they’re simply listening to a folk ballad. Like Hamilton, this musical uses a specific genre of music to defy an audience’s expectations of what a musical should sound like. 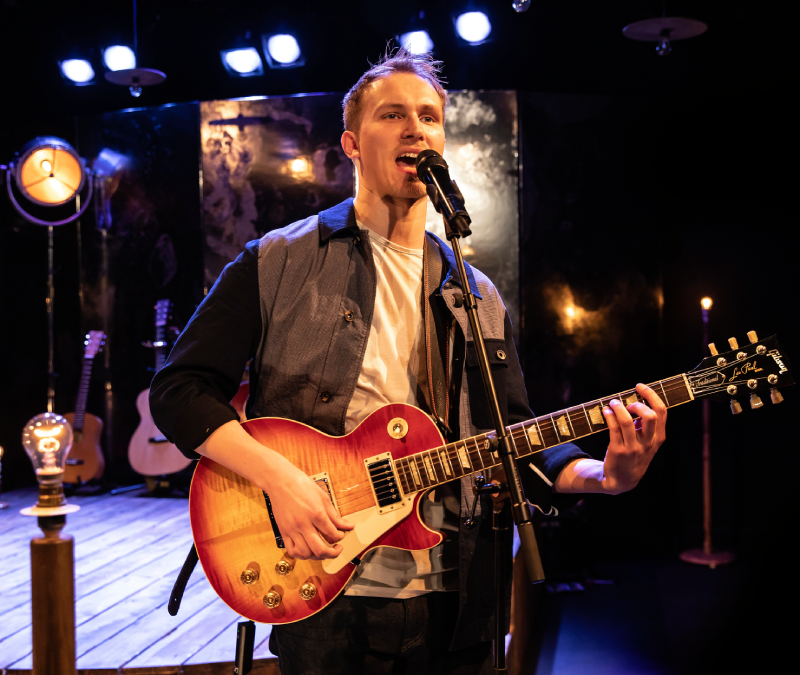 The story of The Lion is deeply personal and biographical. As a performer, how did you approach the role? What helps you prepare for each performance?
Initially, I thought it couldn’t be done. The show is so specific to Benjamin’s story and personality that I thought it would be impossible for anyone to believe that I was Ben. It took a lot of convincing from director Alex Stenhouse that it could be done, and not only that, but having an actor play the role would really elevate the piece. I studied the role like I would any other. I tried to understand the character’s motivations, intentions, relationships and conflicts.

The unique thing about my relationship with this show is that I don’t feel the need to get in the zone. Many actors will psych themselves up before a performance and try to increase the amount of energy in their bodies through a series of exercises. I found that doing this really disconnects me from the audience and makes it feel more like a performance — this isn’t the vibe we want to go for! My warm-up now is just heading into the auditorium, chatting with some members of the audience, tuning a few guitars and then very subtly starting the show. The transition feels seamless, and as such, the audience is lulled into the show without even knowing it has begun.

What is your favorite song to perform in the show?
Each song has been my favorite at one time — they’re all such wonderful moments in different ways. At the moment, it’s probably “Weather the Storm.” Out of context, it’s a lovely song that feels applicable to many situations. It’s the “dad bestows wisdom” song of the show. In context, it’s really quite heartbreaking and seems to be the first place where audience members tend to cry! In terms of staging, it’s a really striking image that one can only appreciate at the theatre.