How do you weather the storm? That question underscores the story and lyrics of The Lion — a solo musical told through monologues and modern folk music. The emotionally stirring tale follows one man’s journey through love, loss and the redemptive power of music. After performing in London last summer, The Lion arrives in Cincinnati for an exclusive Playhouse engagement at Warsaw Federal Incline Theater in Price Hill.

Intimately told by a single performer, The Lion introduces a character named Benjamin who shares with the audience the turbulent story of his family. Chapters begin with his childhood, which is largely defined by his father’s love of music and penchant for writing folk songs. In one of the show’s first numbers, he describes how his father builds him a banjo made of a cookie tin, rubber bands and a necktie. He sings, “When he plays his old guitar I play my cookie-tin banjo, I play my cookie-tin banjo right along with him.”

It’s not long, however, before Benjamin’s life takes a drastic turn. An unexpected event sends shock waves throughout the family, splintering Benjamin’s relationship with them for years to come. When he experiences a brush with his own mortality, Benjamin must summon the courage to weather the storm.

The Lion premiered off-Broadway in 2014 and toured the U.S. and the U.K. until 2017. Benjamin Scheuer, the composer and playwright whose own life inspired the production, took the stage as the solo musical’s performer. The production was hailed as “wondrous” by San Francisco Gate. The Huffington Post wrote, “Spellbinding! See it now. See it again. The best musical I’ve seen this year!” 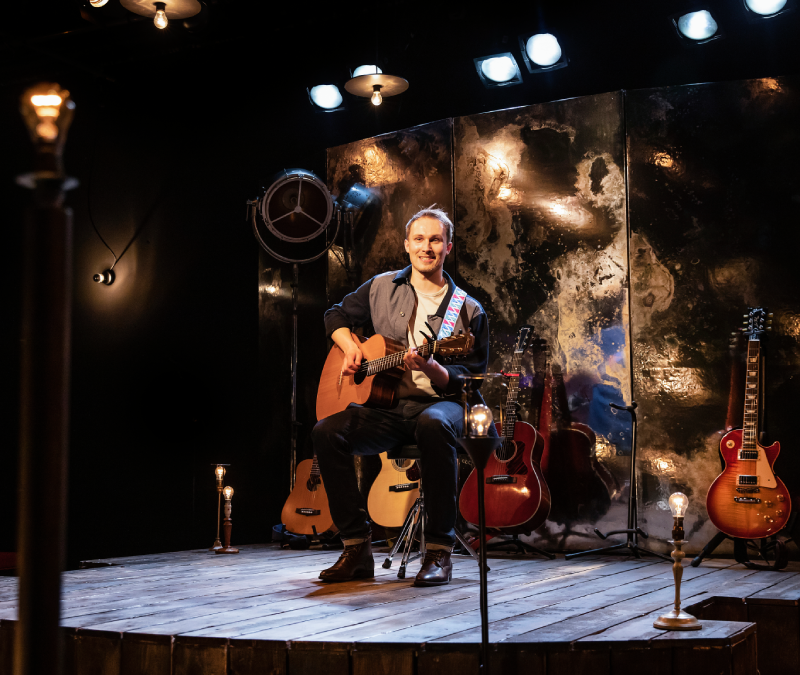 Photo Of Max Alexander-Taylor (Ben) in The Lion at Southwark Playhouse in London by Pamela Raith.

The original production of The Lion was directed by Sean Daniels, who helms the Playhouse’s production alongside co-director Alex Stenhouse. It marks the musical’s first revival, with Max Alexander-Taylor stepping into the role of Benjamin. Stenhouse describes the overall feel of the production as warm and accepting as it revels in a communal, live experience.

“Unusually for a musical, this piece has a real intimacy and directness with an audience, and we’ve directed the show to be far more live and spontaneous than is often possible to be with a large ensemble or orchestra — particularly as the acting and singing is performed by the same person who plays the music,” Stenhouse says. “The Lion is an exciting example that musicals can be small, subtle, sincere and stripped right back to just a person in a room telling a brilliant story.”

Last summer, the production performed at Southwark Playhouse in London, and like the premiere, critics were quick to sing their praises. WhatsOnStage called it “an incredibly life-affirming theatrical experience.” Shenton Stage wrote, “It is simply a gorgeous piece of writing and sublime theatre making that is now the revival of the year.”

“The reviews were some of the best we’ve ever had in our careers… That’s been such a joy,” Stenhouse says. He adds, “It began with a conversation between me and Benjamin Scheuer back in 2019 in London, and to be bringing our production to Cincinnati this year is so surreal and a truly special experience. We’re so proud of it, and we can’t wait for you all to see what we’ve been cooking up across the pond.” Alexander-Taylor says the reactions from critics and audience members have been stronger and more consistent than he could have ever hoped.

“Everyone feels like they have a connection to the show,” says Alexander-Taylor. “Many have talked about how they have come out the other side feeling they’ve learned something new about life and themselves. Many who have suffered similarly to the character Ben have talked of how it’s helped them process their own experiences for the better. I’m hesitant to use the word ‘healing,’ but the more I perform the show, the more the word feels apt.”

With original acoustic music and an unforgettable story that’s as uplifting as it is heartrending, The Lion roars.