This is Miche’s first time at Cincinnati Playhouse in the Park. She has appeared for many years in The Devil’s Music: The Life & Blues of Bessie Smith by Angelo Parra, conceived/directed by Joe Brancato, serving as lead and Musical Director/Arranger and Composer. She and The Devil’s Music have received multiple nominations including Drama Desk, Lucille Lortel, Carbonell, Off Broadway Alliance, AUDELCO, LA Critics’ Choice, Beyond Broadway and Connecticut Critics Circle Awards. Miche has appeared in and served as Musical Director/Arranger for many other stage productions including The People’s Temple, Gee’s Bend, The Bluest Eye and Lady Day at Emerson’s Bar & Grill. She was a member of the band Rough Magic in three productions of The Tempest, which was adapted and directed by Aaron Posner and Teller. She served as Musical Director for their South Coast Repertory production, earning her an LA Critics Choice Awards nomination. She did vocal arrangements for Spike Lee’s Da Sweet Blood of Jesus and has appeared on Law & Order: SVU. She has recorded with Regina Carter, James Carter, Gayelynn McKinney, Postmodern Jukebox and on her own CD, Diva Out Of Bounds – Ms. Miche. Her performance is dedicated to the memory of her mother, Dr. Mildred J. Dobey, her first musical influence. 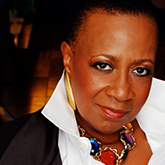 My mother said I’d been acting since birth! Actually, I wound up acting through my singing. My friend, the late great Sylvia Moy (Motown songwriter), was asked by The Old Attic Theatre in Detroit to do a play, but she said she was too nervous. She then told them, “Call Miche, she’ll do it, she’ll do anything!” For training, I learned on stage doing it.

I loved to entertain. I was working as a professional singer around Detroit and I had composed most of the score and conducted the pit band for Ron Milner’s The Rhythm and the Blues before I got the call from The Old Attic Theatre. I found in acting that people listened to the songs because it was part of the story — much different from feeling like a human jukebox in the clubs. Plus, I loved using all of my gifts, like sound scaping a show with original music and arranging. I was hooked! 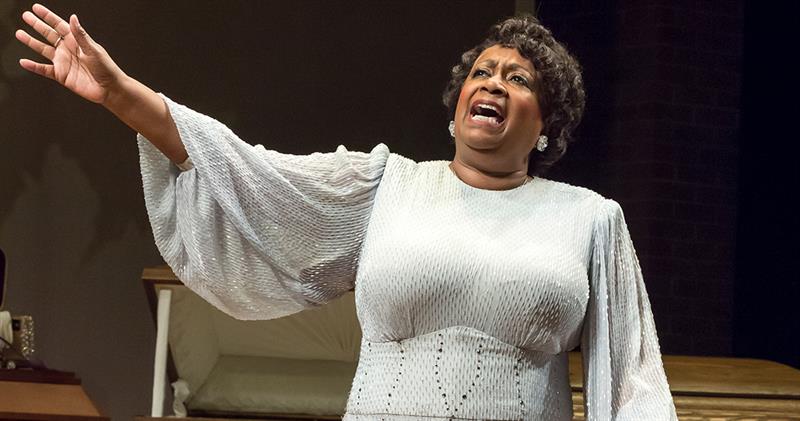 Miche Braden in Marie and Rosetta; photo by Mikki Schaffner.

The Devil’s Music: The Life and Blues of Bessie Smith. Not only did I play the lead, I was a part of the creative process. Director Joe Brancato conceived it, Angelo Parra wrote it, and I composed and arranged the score. We met for two years creating this masterpiece before our world premiere in 2000. I still do it and it has broken box office records every time it’s produced.

Nina Simone. I was raised on her music. I am taking classical piano lessons when I get home because her jazz piano style was based on it. The play I want to do hasn’t been written yet, but I’ll be ready when it is. Maybe I’ll write it. 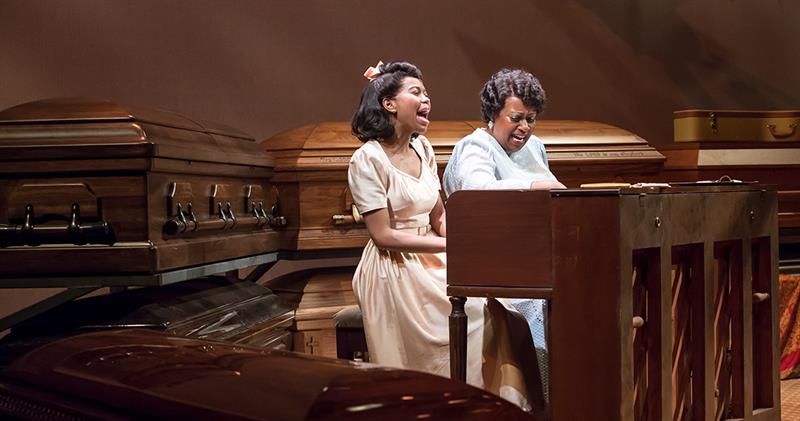 Learning about this larger than life “diva.” I knew her name but had no idea of her impact on the music and musicians. Also working with Chaz Hodges (Marie). We’ve got an honest connection on stage. Makes the show a joy to do.