Share
August Wilson is widely considered one of our most important American playwrights, mentioned in the same breath as Eugene O’Neill, Tennessee Williams and Arthur Miller. Jitney was the first script written in his groundbreaking American Century Cycle, in which he explored the experience of black Americans through a series of 10 plays set in each decade of the 20th century. They are plays that, according to The New York Times, “will stand as a landmark in the history of black culture, of American literature and of Broadway theatre.” 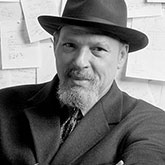 Wilson died in 2005, but his legacy lives on. The man who loved words is perhaps best illuminated by revisiting some of his own in the excerpts below.


On the influence of his hometown, the setting for most of his plays:

I left Pittsburgh but Pittsburgh never left me. It was on these streets in this community in this city that I came into manhood, and I have a fierce affection for the Hill District and the people who raised me, who have sanctioned my life and ultimately provide it with its meaning.
— Pittsburgh Post-Gazette, 1999


On the inspiration of the blues:

Blues is the bedrock of everything I do. All the characters in my plays, their ideas and their attitudes, the stance that they adopt in the world, are all ideas and attitudes that are expressed in the blues. If all this were to disappear off the face of the earth and some people 2 million unique years from now would dig out this civilization and come across some blues records, working as anthropologists, they would be able to piece together who these people were, what they thought about, what their ideas and attitudes toward pleasure and pain were, all of that. All the components of culture. Just like they do with the Egyptians; they piece together all that stuff. And all you need is the blues. So to me the blues is the book, it’s the bible, it’s everything.
— Believer Magazine, 2004


On the importance of storytelling:

There's an oral tradition of black culture in which the verbal agility is very highly prized among blacks. One of the things in telling the story is that if it contains information that you want to pass along, then you have to make the story memorable. So that anybody hearing it will go tell someone else and they'll tell someone else. That's one of the ways that the information stays alive. In the process of telling the story you are permitted embellishment. The only rule, I would guess, is that you cannot change the essential truth of the story, but you can certainly illustrate it, demonstrate it. You may use any kind of metaphor you care to use. You can embellish the story, anything, as long as you are not changing the truth of the story or the information that is being passed out. And not only are you allowed to do that, but you are encouraged to do that and depending on who you tell the story to, you tell it differently to different people.
— Journal of Dramatic Theory and Criticism, 1989


On the impetus for his American Century Cycle:

I wanted to place this culture onstage in all its richness and fullness and to demonstrate its ability to sustain us in all areas of human life and endeavor and through profound moments of our history in which the larger society has thought less of us than we have thought of ourselves.
— The New York Times, 2000


On how a new play begins:

Well, I generally start with a line of dialogue. Someone says something and they’re talking to someone else. I don’t all the time know who’s talking or who they are talking to, but you take the line of dialogue and it starts from there. The next thing you know, you’ve got four pages of dialogue, and after a while you say, “Well, let me name this guy; let’s give him a name. Who’s talking?” And in the process of him talking you find out things about him. So the more the characters talk the more you know about them. It generally starts there.
— African American Review, 2001

I don’t write particularly to effect social change. I believe writing can do that, but that’s not why I write. I work as an artist. All art is political in the sense that it serves someone’s politics. Here in America, whites have a particular view of blacks. I think my plays offer them a different way to look at black Americans. For instance, in Fences, they see a garbage man, a person they don’t really look at, although they see a garbage man every day. By looking at Troy’s life, white people find out that the content of this black garbage man’s life is affected by the same things — love, honor, beauty, betrayal, duty. Recognizing that these things are as much part of his life as theirs can affect how they think about and deal with black people in their lives.
— The Paris Review, 1999


On the importance of theatre:

I believe in the American theatre. I believe in its power to inform about the human condition, I believe in its power to heal, “to hold the mirror as ’twere up to nature,” to the truths we uncover, to the truths we wrestle from uncertain and sometimes unyielding realities. All of art is a search for ways of being, of living life more fully. We who are capable of those noble pursuits should challenge the melancholy and barbaric, to bring the light of angelic grace, peace, prosperity and the unencumbered pursuit of happiness to the ground on which we all stand.
— “The Ground on Which I Stand,” 1996
Keynote to the Theatre Communications Group national conference